Start a Wiki
Watership Down is a 1978 British adventure drama animated film writen, produced and directed by Martin rosen and based on the book by Richard adams. It was finached by a constortium of British financial institutions. Originally released on October 19 1978, the film was an immediate success and it became the sixth most popular film if 1979 at the British box office. The film is rated PG for strong animal violence/gory images and some mild language - all involving animals.

Watership down opens with a narrated prologue establishing the Lapine culture and mythology, describing the creation of the world and its animals by the sun god "Lord frith," including the rabbits' leader, Prince "EL-ahrairah." All the animals are friendly, and eat grass, but with the rabbits soon multiply and overwhelm the other animals. When Frith warns El-ahairah to control his people, the prince scoffs at his warning; in retaliation, Frith gives each animal a gift, turning them into predators that hunt down and kill the rabbits. However, Frith also gifts the rabbits, with speed and cunning; all creatures seek to kill El-ahriariah and his descendants, but the rabbits may survive by their wits and their quickness.

The film then switches from a sylized narrative to realistic animation, set in the English countryside of sandleford. Fiver, a young runt rabbit with prophetic abilities, forsees the end of his peaceful rabbit warren and asks others to leave with him. Fiver and his older brother Hazel attempt to persaude their Chief rabbit to have the warren evacuated and moved elsewhere, but they were dismissed, and attempt to recruit individuals instead. the group meets the resistance from the warren's police force, or Owsla, but eight manage to escape: Fiver, Hazel, the burly ex-Owsla officer Bigwig, the cunning Blackberry, The smallest rabbit Pipkin, storyteller and runner Dandelion, the elder Silver, and the only female, Violet.

They travel stealthily theough the woods, close to many predators, but they make it to a covered bean field to rest the night; however, in the morning, as ahe attempts to feed nearby, Violet is killed by a hawk. After crossing a river(using a floating piece of driftwood), evading a huntibg dog, and escaping a rat-infested cemetary, the hungey band meets a rabbit named Cowslip, who invites them for much-needed food to his warren of strange but friendly rabbits. The group is content and greatful for shelter, but Fiver senses something terribly wrong and leaves in a fit As Bigwig follows him, taunting his bizarre behavior, he is caught in a snare; Fiver attempts to get help from Cowslip and his warren, but he is dismissed. As the rabbits frantically dig to free Bigwig he collapses. As the rabbits mourn him, Fiver admonishes them: The warren is fed by a farmer who occasionally snares rabbits in return for his food and care from predators. After his revelation, Bigwig miraculously awakes; on Fiver's advice, the band moves on with new respect for the seer's wisdom.

The rabbits discover Nuthanger farm, which contains a hutch of female rabbits. Hazel realizes that females will be needed to begin a new warren, but the rabbits are forced to leave by the appearence of the farm's cat and dog. Hazel promises to return, and the rabbits set off again. they are unexpectedly found by the Sandleford's Owsla captin, Holly, who is injured and at the point of death. He recounts the destructon of the Sandleford warren that Fiver foresaw, and collapses after mentioning a warren called Efrafa. After he recovers, Fiver soon leads the group to a high hill he envisioned, Watership down, where rabbits discover empty burrows suitable to live in. They settle in, developing their own warren, with Hazel informally reconized as Chief rabbit.

Hazel: The main protagonist in the film. He is initially the only rabbit who trusts his brother Fiver. Hazel, now an aged rabbit, is invited by El-ahrairah to join his Owsla (a special group of clever rabbits dedicated to protecting their Chief Rabbit and his warren), to which Hazel accepts.

Fiver: Hazel's younger brother; his Lapine name is Hrairoo, which means "Little-thousand". He is a seer, and his visions of the destruction of the Sandleford warren compel him to leave, along with his brother Hazel and several other rabbits. His visions guide his considerable wisdom, such as when he realizes the true danger of the snared warren, which wins him the respect of his fellows who come to accept his counsel without question. Later, when Hazel is wounded by a gunshot in a raid on a human farm's rabbit hutch, Fiver has a vision that enables him to save his brother.

Bigwig: His name in Lapine is Thlayli, which means "Fur-head" and refers to the shock of fur on the top of his head. Formerly an officer in the Sandleford Owsla, the largest and best fighter of the Sandleford survivors. He is often blunt and impatient for dangerous action and fighting. He quickly befriends Kehaar. Hazel often selects him for the most dangerous missions, such as the infiltration of Efrafa and guarding the run against General Woundwort, a stand that nearly kills him. Later, he becomes captain of the Watership warren's "free-and-easy" Owsla.

General Woundwort: The Chief Rabbit of Efrafa serves as the main antagonist in the film. He is a hard and brutally efficient rabbit who was orphaned at a young age. He engineered and founded the Efrafa warren specifically to minimize notice from humans. He is described as the largest rabbit anyone has ever seen, and thought by Holly to be the one rabbit that is more than a match for Bigwig. Woundwort is blind in his left eye. A brutal and tyrannical leader who sees himself as the one doing everything for the best of his warren, Woundwort strives to destroy Hazel and his 'outsiders' because of the hope for free life they represent for his own subjects. After being tricked by Bigwig and Hazel into losing ten does and Blackavar, Woundwort attacks the Watership Down warren with his Owsla and Owslafa. He fights savagely against Bigwig but cannot kill him; after retreating once he realizes that he is afraid to attack Bigwig again. He is thought to have been killed fighting the Nuthanger Farm dog, but he lives on in rabbit legend as a bogeyman and cousin to the Black Rabbit of Inlè.

The film was originally to be directed by John Hubley, who died in 1977. His work can still be found in the film, most notably in the "fable" scene. He was replaced by the film's producer Martin Rosen, his directorial debut.

After the genesis story rendered in a narrated simple cartoon fashion, the animation style changes to a detailed, naturalist one, with concessions to render the animals anthropomorphic only to suggest they have human voices and minds, some facial expressions for emotion and paw gestures. The animation backgrounds are watercolours. Only one of the predators, the farm cat, Tab, is given a few lines, the rest remaining mute.

The backgrounds and locations, especially Efrafa and the nearby railway, are based to the diagrams and maps in Richard Adams's book. Most of the locations in this movie either exist or were based on real spots in Hampshire and surrounding areas.

Although the film was fairly faithful to the novel, several changes were made to the storyline, mainly to decrease overdetailed complexity and improve pace and flow of the plot. In addition, the order in which some events occur is re-arranged. Unlike many animated features, the film faithfully emulated the dark and violent sophistication of the book. As a result, many reviewers took to warning parents that children might find the content disturbing. When the film was first submitted to the British Board of Film Classification, the BBFC passed the film with a 'U' certificate (suitable for all ages), deciding that "...Whilst the film may move children emotionally during the film's duration, it could not seriously trouble them once the spell of the story is broken and a 'U' certificate was therefore quite appropriate".[1] However in 2012, the BBFC admitted that it "has received complaints about the suitability of Watership Down at U almost every year since its classification".[2]

This attitude extended to when the animated Watership Down TV series was marketed with the producers making an effort to reassure parents that the violence was softened and that the main characters would not be permanently harmed in their adventures.

Some marketers in the U.S. were also worried that the main promotional poster (see above) appeared too dark and might scare some children. The poster is actually showing Bigwig in a snare (his distinctive fur is clearly visible), and the image on the poster does not appear in the film, which has a far bloodier depiction of the scene.

The musical score was by Angela Morley and Malcolm Williamson, Morley replacing Williamson after the composer had fallen behind and only composed the prelude and main title theme in sketch form.[3] A list of the musical cues for the film can be found on the composer's website, which also gives information about the different composers working on the project.[4]

The soundtrack included Art Garfunkel's British No. 1 hit, "Bright Eyes", which was written by the British singer and songwriter Mike Batt (although in a different arrangement from the one released as a single). Batt also wrote other songs for the film which were not used. The composer recorded three songs with vocals by Garfunkel, but only "Bright Eyes" made it to the film. The song "When You're Losing Your Way in the Rain" has a very similar feeling and arrangement, and was recorded by the former Zombies vocalist Colin Blunstone in 1979. Garfunkel's version was heard years later, on the TV series soundtrack released in 2000. The song, like many others which appeared on the TV soundtrack, was never used in the show.

Another song, "Watership Down", was written by Gerry Beckley of America for use as the theme song. It was never used, but the band recorded it for their 1976 album, Hideaway. An alternative mix can be found on the boxed set Highway.

The film was an immediate success at the UK box office and has received a generally positive critical reception, with an 81% 'Fresh' rating on Rotten Tomatoes, and a rating of 67% from select critics.[5] The film was nominated for Hugo Award for Best Dramatic Presentation in 1979. In 2004, the magazine Total Film named Watership Down the 47th greatest British film of all time and it was also ranked 15th in the "100 Greatest Tearjerkers".

Investors in the film reportedly received a return of 5,000% on their investment.[6]

Almost twenty years later a TV series with the same title 'Watership Down' was created. It had 39 episodes and was loosely based on the events of the film, albeit the storyline is more child-friendly. 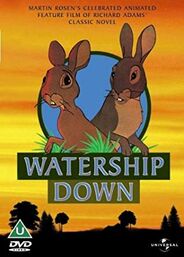 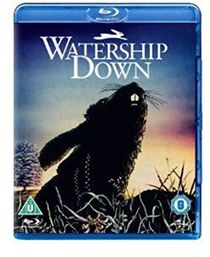 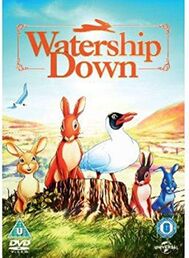 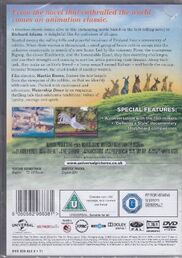 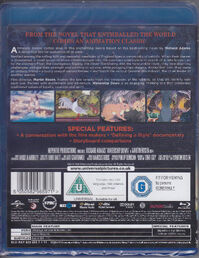 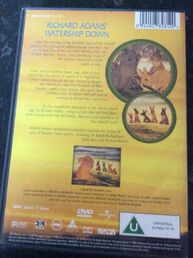 The back of the 2001 UK Universal Watership Down release. 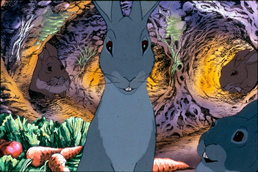 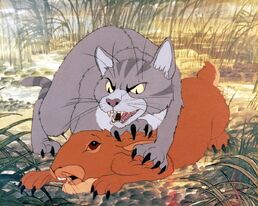 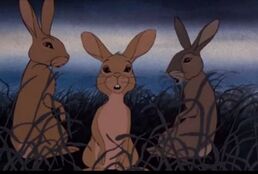 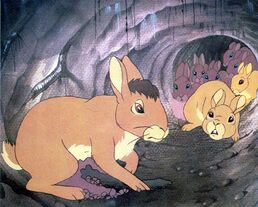 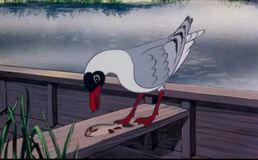 Add a photo to this gallery

Cite error: <ref> tags exist, but no <references/> tag was found
Retrieved from "https://universalstudios.fandom.com/wiki/Watership_down_(film)?oldid=20856"
Community content is available under CC-BY-SA unless otherwise noted.